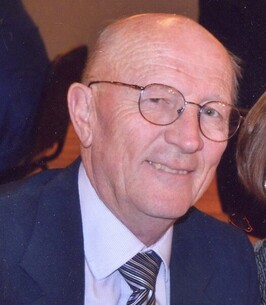 Memorials may be made to Rock Island Rotary or the Monastery of The Holy Cross, Chicago, IL.

Tom was born in Rock Island on April 1, 1944, to Earl and Helen (Boyle) Showalter. He married Maureen Granum, and later married Ann Fusselman on June 13, 1992, in Moline .

Tom's first job was working at his parents' Skelly Service Station on 14th Avenue and 38th Street in Rock Island. Tom graduated from Alleman High School, class of 1962. He attended St. Ambrose University where he graduated in 1968. Tom worked at the Rock Island Arsenal (RIA) from 1968 to 2002 retiring as Director, RIA Industrial Center. There he received several awards for his leadership. Tom was a proud member of the Rock Island Rotary Club, a charter member of the Monday night Apostles tennis league at SPTC/QCTC, and a tennis coach for the boys and girls teams of Seton and Jordan Catholic Schools.

He enjoyed playing tennis, tending to his incredible perennial garden, which included hundreds of hostas, and watching his grandchildren's sporting events.

Tom is survived by his wife, Ann; his daughter Shellee Showalter (Evan Branson) of Rock Island, IL; his step-daughters, Kerry Nichols of DeWitt, IA and Aimee (Mitchell) Wren of Moline, IL. His pride and joy were his three grandchildren: Sydney Branson, Will Wren, and Ethan Wren. Tom had two brothers, Jack (Jane) Showalter, and Monsignor Paul Showalter, and many nieces and nephews.

He was preceded in death by his parents, a sister, and brother-in-law, Janet and Alex Krauska.

Family and friends are invited to express online condolences at wendtfuneralhome.com