To share your memory on the wall of Roy Bayless, sign in using one of the following options:

To send flowers to the family or plant a tree in memory of Roy E Bayless, please visit our Heartfelt Sympathies Store.

We encourage you to share your most beloved memories of Roy here, so that the family and other loved ones can always see it. You can upload cherished photographs, or share your favorite stories, and can even comment on those shared by others.

Posted Apr 17, 2020 at 12:00am
Joe (Roy) and Betty were our neighbors across the street on Rambling Range in Austin and were very close to my parents Sharon and Curtis. My first job was mowing Joe and Betty’s lawn. Now I do not have to tell you Joe made sure I did a good job and he also paid me well. He also organized a meeting for me with George Page, a successful architect in town because I wanted to be an architect, which I now am. Thank you, Joe. Love you Betty.
Comment Share
Share via:
BM

Posted Apr 16, 2020 at 12:00am
I had the privilege of being Roy Bayless' secretary for 12 years at Austin Municipal Airport up until his retirement. He was a wonderful man, and we kept in touch for a number of years. I send my most heartfelt condolences to Betty, Marcia, Gregory, and all family members, and will pray that God will provide His strength and comfort to you in these difficult days.
Barbara Miles
Comment Share
Share via:
FB

Posted Apr 16, 2020 at 12:00am
Thoughts and prayers are with you. Our family is heartbroken. We all loved Roy. From our family to yous, you have our greatest sympathy and love. 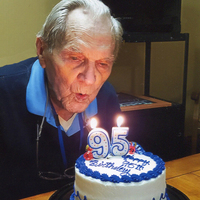