To share your memory on the wall of Richard Bauersfeld, sign in using one of the following options:

A memorial service will be held at 11 am on Wednesday, December 30, 2020 at Wendt Funeral Home, M... Read More
Richard Dailey Bauersfeld of Rock Island, IL, passed away at the age of 94 on December 24, 2020, at Friendship Manor, Rock Island, IL.

A memorial service will be held at 11 am on Wednesday, December 30, 2020 at Wendt Funeral Home, Moline, IL. Face masks and social distancing guidelines are recommended.

Memorials may be made to Friendship Manor, Rock Island, IL or UnityPoint Hospice

He was born in Rock Island, IL, on March 18, 1926, to Frank Edward and Dorothy May (Dailey) Bauersfeld. Richard attended Rock Island Grade Schools and High School, and then graduated from Augustana College in 1948. He married Eileen Reinhart In 1955 at South Park Presbyterian Church, Rock Island, IL. On September 24, 1955, Richard and Eileen were then blessed with their beautiful baby daughter, Kathleen Mary Bauersfeld.

During his high school years, he worked at Dahl’s Drug Store, Camp Halberg and Rock Island Foundry. Then upon graduating from Augustana College, he was employed at Container Corporation of America, Wendt Funeral Home, and then retired as a Head Agent, from Greyhound Lines Corporation, Davenport terminal, after a career of twenty one years. Organizations of which he was a member included Masonic Lodge 655, Phi Omega Phi Fraternity, Chippiannock Cemetery Board, Good Shepard Presbyterian Church, High Twelve and was a charter member of the East Moline Kiwanis Club.

He was preceded in death by his wife, Eileen, parents and a brother, John.
Read Less

To send flowers to the family or plant a tree in memory of Richard Dailey Bauersfeld, please visit our Heartfelt Sympathies Store.

Donations are being accepted for: FRIENDSHIP MANOR INC.

We encourage you to share your most beloved memories of Richard here, so that the family and other loved ones can always see it. You can upload cherished photographs, or share your favorite stories, and can even comment on those shared by others. 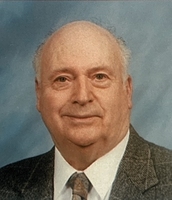