To share your memory on the wall of Larry Lyon, sign in using one of the following options:

There are no events scheduled. You can still show your support by sending flowers directly to the family, or planting a memorial tree in memory of Larry "Bulldog" Lyon.
Plant a Tree

We encourage you to share your most beloved memories of Larry here, so that the family and other loved ones can always see it. You can upload cherished photographs, or share your favorite stories, and can even comment on those shared by others.

Posted Apr 24, 2020 at 12:00am
I am so sorry to hear about Larrys passing. I was not informed until yesterday the he had passed. Your dad was a great guy and I always enjoyed visiting with him. I will plan on attending the celebration of life if I am informed about it. I also called Bruce Rowe yesterday to inform him . Dennis Burke
Comment Share
Share via:
LJ

Posted Apr 16, 2020 at 12:00am
You were a great guy!Dick went to ballgames with you andRick played ball with Matt your son! . God Bless You,!
Comment Share
Share via:
CT 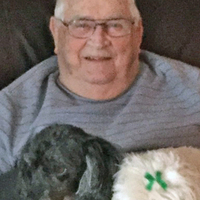