To share your memory on the wall of Kenneth Collinson, sign in using one of the following options:

Kenny was born on August 22, 1939 in Moline, IL to Helen V. and Melvin D. Collinson. He lost his father in a quarry accident in January 1948. He attended Moline Public Schools and graduated from Moline High School in 1957. After that he attended Augustana College where he played quarterback on the Vikings football team and joined the Beta Omega Sigma fraternity. He graduated with a B.A. degree in political science in 1961. In 1961, he married Jacqueline Ann Chinlund. Kenny earned a law degree at Northwestern University and became a member of the Illinois Bar in 1964. His first position as a lawyer was with the Rock Island County State’s Attorney’s Office, where he later served as Public Defender. Subsequently, he joined the law practice of Potter, Gilman, Galvin, Collinson, Konecky & McAndrews in Rock Island and then launched his own law office in Milan with Collinson, Taber & Darrow. In 2005, Robert G. Scott and Lincoln T. Scott joined him to form Collinson & Scott, P.C. From 1990-1992, Kenny served as President of the Rock Island County Bar Association. Later, he served as a director of Blackhawk Bank & Trust and was a proud member of the Milan Area Rotary Club. He was President of Collinson Stone Company in Milan for 34 years. After retiring from his law practice in 2017, Kenny donated his law office building to the Milan Christian Food Pantry, which was dedicated in 2020. He was a member of the 15th Ave Christian Church, Rock Island.

Kenny enjoyed activities with several family members, and close friends who he had known since high school and college. He was a member of Shorthill’s Country Club. He also enjoyed boating (“The Captain”), playing cards (Hearts), and spending weekends at his cabin in Fox Lake, WI. He was an avid sports fan, affectionately following the St. Louis Cardinals, and loyally supporting his grandchildren’s involvement in sports and various other pursuits.

A Celebration of Life service will also be announced at a later date to be held in the summer.

In lieu of flowers, donations in remembrance of Kenny may be sent to the Milan Christian Food Pantry, PO Box 333., Milan, IL 61264.
Read Less

To send flowers to the family or plant a tree in memory of Kenneth Melvin "Kenny" Collinson, please visit our Heartfelt Sympathies Store.

Donations are being accepted for: MILAN CHRISTIAN FOOD PANTRY.

We encourage you to share your most beloved memories of Kenneth here, so that the family and other loved ones can always see it. You can upload cherished photographs, or share your favorite stories, and can even comment on those shared by others.

Jim & Sara Wynes, Phillip Dasso, and other have sent flowers to the family of Kenneth Melvin "Kenny" Collinson.
Show you care by sending flowers

Posted Jan 05, 2021 at 02:53pm
Uncle Kenny was a beacon of grace, generosity, and pure genius. Whether caring for his family, running his successful law practice, serving his community, or taking time to enjoy life, he did everything with extraordinary pizzazz.

Uncle Kenny, thank you for the many lives that you’ve touched, including my own.

Posted Jan 05, 2021 at 01:36pm
I met Mr. Collinson through Lighthouse Homecare as I was one of his caregivers. I immediately knew of his outstanding commitment to the community as well as his love for sports and law, simply by the pictures and awards that displayed in his home. I had the pleasure of reconnecting Ken with a fellow lawyer and the two of them talked on occasion. Both gentlemen thanked me for bringing them together. Though I knew Ken just several months, we talked about sports, and when I would bring up his accomplishments, he would briefly indulge me but then quickly redirect the conversation to his children and grandchildren. He overflowed with happiness when he talked about his family. He was extremely polite and thanked me endlessly for helping him in his cares as well as being a friend. I enjoyed hearing all the stories about Mr. Collinson that each of you shared and I extend my deepest condolences to all his family and friends.
Comment Share
Share via:
L

Joni, Thank you for staying with my dad at night. He enjoyed getting up so easily to talk to you and the other sitters. Lighthouse sitters were wonderful to my dad and helped me know he was being taken care of. Thank you for all you did for him.
BL

Jayne, Thank you for coming to visitation and the funeral. You have been a wonderful friend to both of my parents.
JW 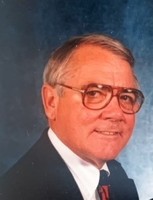 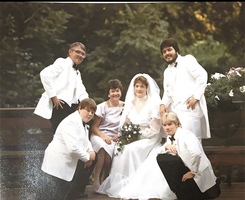 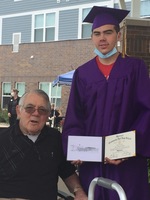 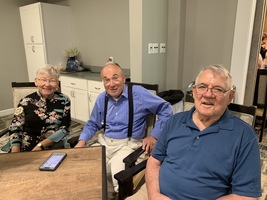