To share your memory on the wall of Charles Buller, sign in using one of the following options:

A graveside service will be held on Friday, April 23, 2021 at 10:30am. Burial will be in Chippiannock Cemetery, Rock Island.

Memorials may be made to the Quad City Animal Welfare in Milan, IL.

Charles was a graduate of Moline High School Class of 1947, and received his BA from Western Illinois University. He was employed at the Rock Island Arsenal from 1949 until 1957, when he moved to Florida to work in the graphic arts business. Returning to Moline in 1965, he worked at Desaulneirs, then Bawden Printing, and finally Lindsey Industries. He retired in 1992, and sold real estate from 1993 to 1998. In 2006 he began an enjoyable experience as a volunteer at the Trinity Medical Centers in Moline and Rock Island. He was a member of South Park Presbyterian Church, and loved to play and watch golf.

In addition to his wife, Helen, he was preceded in death by his parents, a sister: Katherine Rannow, and a brother: Dale Buller.

Family and friends are invited to share memories and express online condolences at www.wendtfuneralhome.com
Read Less

To send flowers to the family or plant a tree in memory of Charles Buller, please visit our Heartfelt Sympathies Store.

We encourage you to share your most beloved memories of Charles here, so that the family and other loved ones can always see it. You can upload cherished photographs, or share your favorite stories, and can even comment on those shared by others.

Posted Apr 22, 2021 at 09:13am
To Daughters of Chuck Buller: I always knew him as Chuck,You don't know me but I worked with your Mother for years, I have 3 daughters and our two families used to picnic together, and your Mother and I always told stories of our girls! Then in later years I would go to trinity for one thing or another and your Dad and I would have a nice talk! I am sorry for your loss, I know how hard it is to become orphans , no matter your age! Wish I could see you girls again, but I am afraid to go to funerals, since the pandemic, I am sure you understand that! So again I say sorry ,we lost another great guy, and he will be forever missed!
I am Carrol Anderson , my email is canders3787@yahoo.com
Comment Share
Share via:
AA

Posted Apr 20, 2021 at 05:54am
I took care of Charles when he came to friendship manor & i truly enjoyed him. A wonderful person with such a great sense of humor. I will miss this kind soul ❤️-Jenika
Comment Share
Share via: 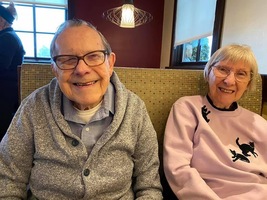